the premiere of MESMERIC FOREST – a new “imaginary landscape” – by Hilary Jeffery will take place on Saturday 15 October 2011 performed on the GRM ACOUSMONIUM at KONTRASTE FESTIVAL in Krems, Austria 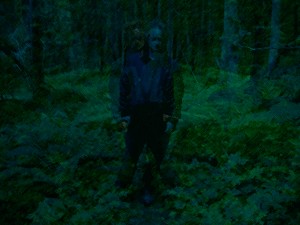 MESMERIC FOREST is a synthetic sound world, suggesting a forest environment and designed to trigger a form of “peripheral hearing”. The music is made using a variety of digital and analogue electronic techniques, evoking the sounds of a forest with material which is reminiscent of insects, birds, crickets, frogs, air… Many of the sounds will be high frequency and the music will be played back (diffused) spatially at a low volume, sometimes quite imperceptibly. The sound is conceived as a representation of an actually existing place – projected from inner-imagination into the performance space in a way which will induce a particularly concentrated state of mind, but one which is not focused on an exact image. The sounds will engage and invite listeners to form their own associations, there will be space left for their imagination and for them to connect the externally projected sounds with their own “inner sounds”. The peripheral / low volume nature of the music will cause a form of searching in the minds of listeners. The sounds will be mostly high frequency electronic loops, with rhythmic patterns which could induce a slightly hypnotic state – so that the landscape connects with a subconscious part of the listeners, bringing the landscape alive in their inner-imagination. The diffusion of this music via the Acousmonium will be considered to be a visit to this imaginary landscape, or as a door opening into it. A recording of this live-diffusion will be considered to be a “field recording” of this landscape. Hilary Jeffery has been creating and collecting raw materials for this environment during summer 2011. These materials will be constructed and tried out in September at GRM Studios in Paris. The main idea is not to make a classical composition, but to create a complete multi-channel forest landscape designed for the Acousmonium which will be “visited” during the performance of c.30 minutes at Kontraste Festival in Krems on Saturday 15 October

‘A composer knows his work as a woodsman knows a path he has traced and retraced, while a listener is confronted by the same work as one is in the woods by a plant one has never seen before’ John Cage from “Experimental Music” in “Silence” (1939 – 1961